1. That every judge who takes the bench each morning hating their job, having "heard it all," and serving no purpose but to rubber stamp the government, resign.

2. That every prosecutor who believes that defense lawyers are the problem in the criminal justice system, not the defendants, resign.

3. That Mike Nifong, the sorriest excuse for a lawyer, much less a prosecutor, resign

4. That every police officer who has taken on the practice of screaming at, threatening, and jumping on each and every person they arrest, take a deep breath and know that recently in Miami, an officer came across a fugitive on a murder case who was in the courthouse for another case, quietly told him he would have to take him into custody, and calmly put handcuffs on him and took him to jail.

5. That every private defense lawyer in this practice solely to make money, go do something else.

6. That the prosecutor's "supervisor," (akin these days to the all involved manager at a car dealership) who tells his "supervisee" to "try the (crappy, stupid) case" instead of letting him/her offer the reasonable plea that he/she wants to offer, actually try the case, instead of running back to the office.

7. That the private defense bar cease behaving like this practice is to be handled like selling products at a flea market.

8. That the media stop saying that the defendant "cut a deal," or that a continuance of a trial date is "yet another delay," and that after an acquittal "the victim's family still has no justice." On that last one, an acquittal is justice, you in the media just don't get the post-sentencing jailhouse interview.

9. That every private defense lawyer practicing over 5 years, take a public defender to lunch, maybe a few times this year. And not to the sub shop, to one of those nice places we go with our "friends." Talk to them about their job, maybe it will remind you (and me) of a few things.

10. A little more g-d damn respect and professionalism, by and from everyone in that courtroom. You all know what I'm talking about.

Brian Tannebaum is a criminal defense attorney in Miami, Florida practicing in state and federal court. To learn more about Brian and his firm, Tannebaum Weiss, please visit www.tannebaumweiss.com
Posted by My Law License at 4:51 PM 2 comments:

I hate to be profane, but are you f***in kidding me?

Here's the headline from the News & Observer in North Carolina:

We continue: "Brian Meehan, director of DNA Security of Burlington, said his lab found DNA from unidentified men in the underwear, pubic hair and rectum of the woman who said she was gang-raped at a lacrosse party in March. Nurses at Duke Hospital collected the samples a few hours after the alleged assault. Meehan said the DNA did not come from Reade Seligmann, David Evans, or Collin Finnerty, who have been charged with rape and sexual assault in the case."

"Was the failure to report these results the intentional decision of you and the district attorney? Cooney asked.

From the North Carolina Bar Rules of Professional Conduct:

Rule 3.8 Special Responsibilities of a Prosecutor

The prosecutor in a criminal case shall:

(a) refrain from prosecuting a charge that the prosecutor knows is not supported by probable cause;

(d) after reasonably diligent inquiry, make timely disclosure to the defense of all evidence or information required to be disclosed by applicable law, rules of procedure, or court opinions including all evidence or information known to the prosecutor that tends to negate the guilt of the accused or mitigates the offense, and, in connection with sentencing, disclose to the defense and to the tribunal all unprivileged mitigating information known to the prosecutor, except when the prosecutor is relieved of this responsibility by a protective order of the tribunal;

Mr. Nifong needs to surrender his license. He is not worthy of the Bar, as a prosecutor, or any type of lawyer.

Brian Tannebaum is a criminal defense attorney in Miami, Florida practicing in state and federal court. To learn more about Brian and his firm, Tannebaum Weiss, please visit www.tannebaumweiss.com
Posted by My Law License at 5:53 AM 11 comments:

Is The Duke Rape Case Over - AGAIN?

DNA testing conducted by a private lab in the Duke lacrosse rape case found genetic material from several males in the accuser's body and her underwear - but none from any team member, including the three charged with rape, according to a defense motion filed Wednesday.

The information was not disclosed in a report on the testing prosecutors provided earlier this year to the defense.

Brian Tannebaum is a criminal defense attorney in Miami, Florida practicing in state and federal court. To learn more about Brian and his firm, Tannebaum Weiss, please visit www.tannebaumweiss.com
Posted by My Law License at 7:33 PM 1 comment: 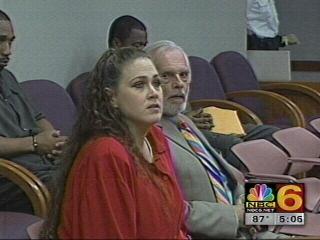 Within the last year Ellis Rubin represented a witness (picture above) in one of my cases. That was the only opportunity I had to meet and speak with him. Regardless of his reputation for flamboyant defenses and love for the media, he was a gentleman to me, and I am grateful for the few moments I had to share a courtroom and a case with him.

Rest in Peace.
Posted by My Law License at 6:47 AM No comments:

You Better Watch Out - Kid Arrested For Opening Present Early

COLUMBIA, South Carolina (AP) -- A fed-up mother had her 12-year-old son arrested for allegedly rummaging through his great-grandmother's things and playing with his Christmas present early.

The mother called police Sunday after learning her son had disobeyed orders and repeatedly taken a Game Boy from its hiding place at his great-grandmother's house next door and played it.

He was arrested on petty larceny charges, taken to the police station in handcuffs and held until his mother picked him up after church.

"My grandmother went out of her way to lay away a toy and paid on this thing for months," said the boy's mother, Brandi Ervin. "It was only to teach my son a lesson. He's been going through life doing things ... and getting away with it."

Police did not release the boy's name.

The mother said that her son was found in the last year to have attention deficit hyperactivity disorder, but that his medicine does not seem to help. (AND JAIL WILL?)

The boy's case will be presented to Department of Juvenile Justice officials in York County, who will decide what happens to him, Bollinger said. His mother hopes he can attend a program that will finally scare him straight. (ARE THEY MAKING A LIST AND CHECKING IT TWICE?)

"It's not even about the Christmas present," she said. "I only want positive things out of it. ... There's no need for him to act this way. I'd rather call myself than someone else call for him doing something worse than this."

I would have just told the kid that he better be good for goodness sake.
Posted by My Law License at 6:28 AM No comments:

The Criminalization of Life

Although I generally delete chain e-mails (especially those that ask me to send them to 5 people), I found this of interest:

1973.....Vice Principal comes over, takes a look at Jack's rifle, goes to his car and gets his to show Jack.

2006 ......School goes into lockdown, FBI called, Jack hauled off to jail and never sees his truck or gun again. Counselors called in for traumatized students and teachers.

Scenario: Johnny and Mark get into a fist fight after school.

1973 ...Crowd gathers. Mark wins. Johnny and Mark shake hands and end up best friends. Nobody goes to jail, nobody arrested, nobody expelled.

2006 ......Police called, SWAT team arrives, arrests Johnny and Mark. Charge them with assault, both expelled even though Johnny started it.

Scenario: Billy breaks a window in his father's car and his Dad gives him a whipping.

1973 ........ Billy is more careful next time, grows up normal, goes to college, and becomes a successful businessman.

2006....... Billy's Dad is arrested for child abuse. Billy removed to foster care and joins a gang. Billy's sister is told by state psychologist that she remembers being abused herself and their Dad goes to prison. Billy's mom has affair with psychologist.

Scenario: Mark gets a headache and takes some headache medicine to school.

1973..... Mark shares headache medicine with Principal out on the smoking dock.

Scenario: Johnny takes apart leftover firecrackers from the 4th of July, puts them in a model airplane paint bottle, blows up a red ant bed.