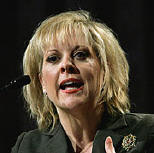 The buzz is that this woman who's kid went missing, shot herself after being grilled by Nancy Grace about whether she was the killer of her own child. The story is here.

I've spoken before about Nancy Grace. ("Your Objection is Overruled") who I think does nothing more than irresponsibly play into the mob mentality of Americans who think the criminal justice system should operate without defense lawyers, and without a constitution.

But honestly, I'm not ready to blame her for this woman's suicide. Maybe after the interview the woman came to terms with the fact that she killed her kid. I don't know, and either does anyone else. The only two people who know are her, and her kid, and they're both dead.

My interest in this story is with the conservative media pundits who jumped on the "how dare she" bandwagon last night. Even Joe Scarborough, whom I happen to like, was talking about the story with the phrase "Nancy Disgrace?" on the screen.

What's the deal? Is even the conservative right tired of her espousing hate for the criminal justice system? I thought you guys all quietly loved her.

Brian Tannebaum is a criminal defense attorney in Miami, Florida practicing in state and federal court. To learn more about Brian and his firm, Tannebaum Weiss, please visit www.tannebaumweiss.com
Posted by My Law License at 6:22 AM